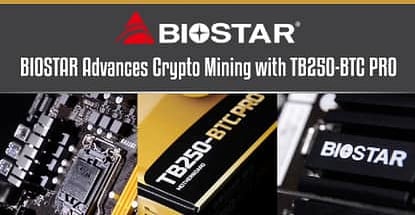 In a Nutshell: With the mining of cryptocurrency gaining popularity in tandem with the rise in coin values, it’s imperative that new and existing rigs have both power and cost efficiency. As larger corporations enter the field and force individuals into pools, hardware developers are scrambling to create improved tools to level the playing field. With the introduction of the BIOSTAR TB250-BTC PRO in July of 2017, miners now have the ability to run up to 12 graphics cards in tandem without the need for a bridge or second system. The powerful processing speeds are twice that of the previous TB250-BTC model. BIOSTAR promises that the improved speed and lower price point will help miners equal their return on investment faster.

Since the inception of cryptocurrencies like Bitcoin, the first digital currency released in 2009, large finance corporations were slow to latch on to the idea. The decentralized nature of the virtual coins was thought to be a modern version of the Wild West, where lawlessness ruled and the person with the biggest computer called the shots.

Many have warmed up to the idea as valuations skyrocket and multinational corporations, including Microsoft, Virgin, and mobile payment company Square, now accept Bitcoin as a method of payment. It doesn’t hurt that a single Bitcoin, valued at $384.74 on November 2, 2015, was worth $7,039 on the same date two years later.

Cryptocurrency miners have always been the backbone of the decentralized system. Since the practice of mining started with an Intel Core i7 990x with the efficiency of 33 MH/s in 2009, the power behind the systems miners use to perform their cryptographic calculations has grown almost as fast as the value of the coins they hunt.

As larger entities get into the mining game, small-time hobbyists find it harder to compete. Most have moved to pools, where large groups of miners combine their systems to increase their odds of profitability. In that time, hardware manufacturers have been pressed to create newer, more powerful tools to meet the demands of the growing number of miners jumping on the next big coin looking for a ride to the top.

BIOSTAR, one of Taiwan’s top global brands, has been a manufacturing leader in crypto mining motherboards since the beginning. Its introduction of the TB85 instantly placed the product at the top of every miner’s wish list.

The TB250-BTC PRO Motherboard by BIOSTAR is among the most powerful and cost-efficient pieces of mining hardware on the market.

The TB250-BTC PRO, introduced at Computex Taipei 2017, has become a go-to motherboard for miners and one of the most powerful pieces of hardware in the industry.  With 12 native PCI-E slots that support both AMD and NVIDIA graphics cards, the board doubles the earlier model and allows the use of up to 12 cards at once for twice the speed and twice the board utilization. The increase in utilization means a faster increase in return on investment (ROI).

The race to boost power is nothing new to BIOSTAR, which has lead the way in computer hardware electronics for more than three decades.

“Since we were formed in 1986, the BIOSTAR Group has become a major motherboard supplier in the IT industry as well as in the Internet of Things (IoT),” Kevin said. “In order to pursue the best quality and aesthetic design, BIOSTAR invests heavily in ID design, equipment, global marketing research as well as research and development.”

Cramming 12 graphics cards onto a single motherboard was no easy task. It’s something that BIOSTAR designed carefully. The finished product is a neat design that evenly distributes power to eliminate the risk of short circuits or other disruption to your mining activities. The matrix arrangement of the PCI-E slots create substantial spacing between each slot for easy access, so each daughter card connection does not interfere with its neighboring slots.

The ability to run 12 cards at once without a bridge increases motherboard utilization by 200% and cuts down on the time it takes to reap the financial benefits and recoup its upfront cost.

Along with the tools you’ll need to succeed, the motherboard comes with a three-year manufacturer warranty and robust customer service to get you up and running fast.

“We have many ways to get in contact with support, such as social networks, our blog, website e-support, and e-mail,” Kevin said. “We also created a crypto mining feature page and offer a knowledgebase of crypto mining, rig setup, and ethOS guide. We want miners to be able to find a solution easily.”

Save on Setup Costs By Running One System Instead of Two

The TB250-BTC PRO’s new age of power brings an edge back to the individual miner at a price point that is both affordable and recoverable in a short amount of time.

Its current $150 price point is manageable, considering a smaller board would require two builds with the lesser TB250-BTC (around $95 depending on the e-tailer), as well as two CPUs, SSDs, memory sets and power supplies. The cost of a smaller rig can quickly add up.

With the inclusion of the B250 chipset, which adds mining stability and increased compatibility across platforms, the motherboard is future-proof and won’t require an expensive upgrade anytime soon. Kevin said it’s just one of the touches that BIOSTAR has put into the board to keep it current with the constantly evolving needs of miners.

“In the future, we will introduce a GPU detection function for miners to identify whether their GPU is connected firmly on the motherboard and it is working well,” he said. “Also, we will have an exclusive mining mode to help miners set up their mining rig easily. In the meantime, we’re also working with ethOS to offer our users an even more convenient way to plug and mine.”

As Cryptocurrency Values Rise, BIOSTAR Looks To Increase Your ROI

As more and more miners enter the space with an eye on the ever-growing value of cryptocurrency, a miner’s rig must be powerful enough to maintain a constant connection, and be prepared for future advances in technology.

BIOSTAR, an industry leader with roots in the emergence of crypto mining, maintains its focus on developing hardware products that increase utilization while cutting down on the upfront costs that sink most miners before they can get going.

With the ability to run 12 graphics cards at once, the TB250-BTC PRO advances motherboard technology by using 200% more power than previous models, while eliminating the risks associated with short circuits and power surges.

With an entry-point cost below that of two of the previous 6-card models, the PRO allows miners at any level of experience the opportunity to create a rig that improves their return on investment by weeks and makes their operation more profitable in the long run. It’s part of the dedication that BIOSTAR’s had to the mining community since its inception.

“We have worked hard in the crypto mining industry since the initial development stage of Bitcoin in 2012,” Kevin said. “As a professional brand for crypto mining products, BIOSTAR is out to produce the best crypto mining experience for customers worldwide.”