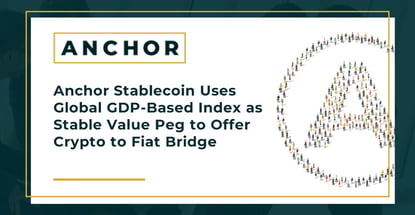 In a Nutshell: Cryptocurrency stablecoins aim to solve the problem of crypto volatility with systems that peg their value to fiat currencies, including the U.S. dollar. But those cryptos are unable to respond to the inherent vulnerabilities of the fiat system itself, where currencies fluctuate in relative value and inflate and depreciate over time. Anchor stablecoin is different. By pegging its coin against a basket of fiat currencies and then algorithmically controlling its supply relative to global GDP, Anchor aims to solve the problem of crypto volatility — and establish a rationale for a viable currency ecosystem that improves on fiat as a stable store of value.

Cryptocurrencies like Bitcoin are undoubtedly capable of being used as mediums of exchange. But they’re a long way off from being counted on as if they were sovereign currencies because of their volatility — both real and perceived.

To counter that, crypto advocates developed stablecoins that peg crypto directly to fiat currencies, including the U.S. dollar. Innovative as it is, that type of crypto collateralization still has a more fundamental problem — fiat currencies like the dollar depreciate over time.

In normal times, the U.S. Federal Reserve Board adjusts the discount rate to influence the supply of dollars in circulation, encouraging lending and consumption by maintaining slow and steady inflation.

And when events like the financial downturn of 2007-08 — or the 2020 COVID-19 pandemic — can slow the economy enough to drive interest rates effectively to zero, the Fed embarks on a policy of asset purchasing known as quantitative easing. That means injecting vast amounts of new money into circulation but potentially exposing the system to dangerous overinflation.

There’s no Bitcoin Fed chairman to tweak the coin’s supply in response to economic unpredictability. But Anchor is a new kind of stablecoin that solves the problem of crypto volatility in a way that also mitigates against fiat’s structural tendency to inflate in good times and in bad.

“One of our taglines is that the money one earns in life should not lose value,” Anchor CMO Miloš Milosavljević said. “That’s very hard to achieve in the current monetary landscape — especially now that COVID-19 has revealed how vulnerable currencies actually are.”

Anchor differentiates itself from other stablecoins through a mechanism called the Monetary Measurement Unit (MMU). And its coin is pegged not to an individual fiat currency — like the U.S. dollar — but to the global economy as a whole.

While individual fiat currencies fluctuate in value relative to each other, all eventually leaching value through inflation, the MMU indexes Anchor to the stable and predictable growth of global GDP.

The idea for the MMU came to Anchor Founder and CEO Daniel Popa in 2014 as he was contemplating a Bitcoin investment. By 2018, he had incorporated Anchor and assembled a team.

“The goal was to create a stable store of value and medium of exchange that would allow people to hedge against risk or store value in something that will not burst in a bubble,” Milosavljević said.

The core MMU calculation derives from a basket of the 10 strongest global currencies based on GDP. Every year, the system updates the basket to ensure the most stable national currencies are always represented.

Additional MMU benchmarks include the FX Indicator and the MMU Premium. According to an Anchor white paper, the FX Indicator “uses international market exchange rates for the most relevant currencies in the global economy and enables the daily nominal expression of the MMU.” At the same time, the MMU Premium “calculates the amount of growth that can be expected based on sovereign bond yields of AAA-rated countries, as well as the average inflation rates.”

To derive a single computational figure from these and other data points, Popa conceptualized a proprietary algorithm that a team of consulting economists continues to refine to align the Anchor stablecoin with “an ever more precise index … creating the most stable and predictable value peg in the world,” according to the white paper.

Through a novel dual-token mechanism, the MMU effectively functions like a Fed chairman for Anchor. In the system, Anchor Tokens (ANCT, available in most non-U.S. markets on the popular Liquid and IDEX exchanges) serve as the main currency and payment tokens, while Dock Tokens (DOCT) perform a utility function.

“The MMU and the dual-token mechanism work together to algorithmically control the supply of ANCT tokens in circulation and align ANCT’s price with the MMU,” Milosavljević said. “These two components are the heart of the entire system.”

If the price of ANCT on Liquid or IDEX deviates by more than a percentage point from the MMU value, the system mints or burns new Anchor tokens accordingly.

During a contraction phase, when ANCT’s price falls below the MMU threshold, favorable exchange rates incentivize ANCT holders to make money trading for DOCT, which isn’t available on Liquid or IDEX. That decreases the supply of ANCT, therefore raising its price.

During an expansion phase when ANCT’s price exceeds the threshold, DOCT holders are invited to exchange their tokens for ANCT tokens, increasing ANCT’s supply and therefore decreasing its value on the exchanges.

“Of course, speculators like the fact that mechanisms such as these don’t generally exist in cryptocurrency — that currency values can oscillate widely on the exchanges,” Milosavljević said. “People can make fortunes out of those oscillations, but most actually lose money.”

Whether demand increases or decreases, the incentives are designed to ensure that ANCT holders benefit automatically while maintaining the token as a stable store and exchange medium.

“Anchor allows you to preserve value rather than gamble with it,” Milosavljević said.

Anchor remains in a bootstrapping phase and is self-financing additional components of its alternative financial ecosystem. Its currency will be inherently more stable and predictable than any single fiat, even in times of severe economic distress, Milosavljević said.

Anchor CMO Miloš Milosavljević spoke with us about the innovative stablecoin.

“The first branch on our road map is to develop an exchange on top of the stablecoin itself, with the coin serving as its benchmark token or transaction corridor,” Milosavljević said.

Also on the horizon is Anchor Pay, which the team views primarily as a remittance service that will also have implications in ecommerce supply chains.

Work remains, but now the system is giving rise to additional opportunities, not the other way around.

“Look out for some novel implementations of crypto and blockchain technology that will open up the space for tokenizing a whole new array of assets that are currently on the sidelines in terms of unused capital,” Milosavljević said.