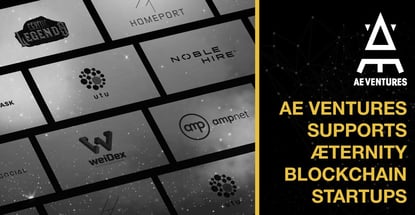 In a Nutshell: AE Ventures is the investment arm of the æternity blockchain, and it is on a mission to encourage promising startups to work together on the æternity platform. Through its Starfleet accelerator, AE Ventures brings the best blockchain business applicants from all over the world into results-oriented investment, mentoring, and advisory relationships that can last long after the acceleration stage. While startups seem to come and go in other parts of the blockchain space, firms that work with AE Ventures often find the staying power they need to solve real-world problems in innovative ways.

Imagine a single global medium of exchange that requires no fiat system and that securely and transparently links buyers and sellers around the world. No borders interrupt transactions, no intermediaries extract profit, and only the laws of supply and demand govern their value.

That’s the promise of cryptocurrency and blockchain technology that has taken shape over the past decade. Thousands of crypto platforms have launched, and many more are exploring the operational implications of blockchain architectures.

Crypto has undoubtedly attracted its share of opportunists, but it’s also true that the space has become a proving ground for people who want to change the world for the better.

A prime example of the latter is the team at æternity, where work on a scalable blockchain platform pushes more possibilities for crypto.

What’s more, through its investment arm AE Ventures, the platform proactively supports blockchain startups looking to make their mark as disruptors in a range of industries. Since its launch in 2017, AE Ventures, based in Sofia, Bulgaria, has invested nearly $2 million in 15 startups that work together on the æternity platform to build more efficient and inclusive ways of doing business.

Through its Starfleet accelerators, seed-stage projects receive five weeks of coaching, and the best entries from each group have the opportunity to receive up to $100,000 in funding. Projects beyond the seed stage are also candidates for AE Ventures support, and every firm gets up to six months of mentorship and advisory assistance.

The results demonstrate the æternity platform’s possibilities in a variety of practical use cases.

“We select projects that solve problems,” said Elisaveta Georgieva, a member of the AE Ventures Marketing and Communications team. “Because we do really believe in blockchain.”

And AE Ventures helps populate the platform. Through its Starfleet accelerators program, startups undergo an intensive process to bring their ideas to fruition.

The most attractive Starfleet applicants have identified a problem and proposed a blockchain-based solution. And they’re committed teams looking for help in crafting a business model and a smooth go-to-market strategy.

Candidates go through an interview process that reduces their ranks to about 20 who receive invitations to participate in Starfleet’s Genesis Week.

“Genesis Week is the most intense part of the accelerator,” Georgieva said. “Every day for seven days, teams are in boot camp, participating in lectures and workshops with leading experts from all over Europe.”

After Genesis Week, the candidates pitch their projects to the AE Ventures team to earn the right to proceed further in the accelerator.

“We call it internal selection,” Georgieva said. “On that day, we shortlist again, inviting a final cut of projects to participate in a full month of mentoring.”

The first two Starfleet accelerator programs were held in AE Ventures’ home base of Sofia, and Malta served as host for the third accelerator. While those three attracted an international cohort and their Demo Days were live events, the fourth Starfleet event was composed entirely of Indian companies and was held in Bangalore, India.

Successful Startups Continue Working Together on the æternity Platform

AE Ventures is always on the lookout for projects that are further along in their development than the seed stage. When it locates a firm that shares its deeply rooted passion for blockchain entrepreneurship with a social mission, AE Ventures often extends funding offers.

“We’re always working on broadening our reach and on supporting the æternity ecosystem in every way we can,” Georgieva said. The results comprise a portfolio of firms that spans sectors and continents.

A case in point is AMPnet, which operates a white-label investment platform for green energy crowdsourcing. A solar energy project might work with AMPnet, for example, to manage fractional ownership of solar panel installation. In this way, individuals who may not have the means to own panels can still support renewable energy.

Elisaveta Georgieva, from the AE Ventures Marketing and Communications team, spoke with us about how the platform helps startups thrive.

Other projects include CryptoTask, which allows firms and workers in the global gig-based economy to find, post, and review freelancing jobs. Noble Hire works in AE Ventures’ hometown of Sofia as a job search platform for software developers.

Kenya-based RideSafe works in Africa to physically connect motorbike riders to nearby emergency responders who can help them in the event they have an accident.

In the blockchain space, TraDEXsocial operates a mining and exchange platform, ReCheck is building an asset tokenization service, and Honeycomb connects buyers and sellers of data generated on the internet of things (IoT).

Finally, proving the point that blockchain can be fun, the German firm Abend uses æternity as a ticketing and transaction platform for festivals and events.

“They’ve developed a wristband and app that eliminates waiting in line to purchase tokens or drinks,” Georgieva said.

While the path is not yet clear for crypto to emerge as a single global currency, the work of æternity and AE Ventures supports the argument that blockchain has a place in the future. And AE Ventures helps elevate good ideas into workable projects.

“We’re not looking for problems for blockchain to solve, we’re looking for real-world business models that will actually benefit from the technology,” Georgieva said.

That’s why the post-acceleration stage is so essential — AE Ventures mentorship and connections offer businesses the competitive edge they need to succeed over the long term.

“We’re not just investors,” Georgieva said. “We also provide marketing and consultancy services and support for business development, which extends to helping our firms at events or with legal advice.”

The AE Ventures team aims to find projects that will impact the future of the blockchain.

AE Ventures also encourages its startups to build financial and support relationships outside the æternity ecosystem.

“We are always up for co-investors,” Georgieva said. “We want our startups to have the resources they need to develop their ideas and grow.”

The impact of the COVID-19 pandemic has forced changes on AE Ventures beyond just moving its Demo Day for Starfleet 4 online. For example, the festival ticketing firm Abend began exploring ways to use the æternity blockchain to compensate online performers.

And AE Ventures itself — normally active in the developer community in Sofia as a host of “blockchain brunches” and other in-person networking events — began incorporating more podcasting and video to continue its advocacy for blockchain over the internet.

“We’re a team of only 12 people, but all of us are experienced, and we want to put our knowledge out there,” Georgieva said. “Blockchain is a technology that can be used in the future for solving a lot of problems.”